Shabbat Morning Services begin at 9:30 a.m. and end around 12:30 p.m. On most Shabbatot, services are followed by a kiddush and luncheon, often including excellent conversation, and a reinforcing of a strong sense of community. These services are held in our Cliffside Park sanctuary, and our led by our rabbi, Shammai Engelmayer.

Friday Evening Services begin at 6:00 p.m. These services are held in our new sanctuary at 1585 Center Avenue (corner of Whiteman), in Fort Lee, and are usually led by Rabbi Meir Berger, with Rabbi Engelmayer assisting.

Several times during the year, we also sponsor Daven 'n'Dine Friday Nights, which begin with evening services, followed by a communal dinner.

Elements of the service:

Why we do What we do

The Sh’ma                The Sh’ma is not a prayer; it is required reading, based on Deuteronomy 6.7—“and you shall speak of them when you...lie down, and when you rise up.”  The preferred method of reading the Sh’ma, according to halachah, is to chant it with its trop, which is what we do for all three paragraphs. Speed reading is not appropriate at this time. (See “The blessings before the Sh'ma” for more on this.)

The Amidah          The Sages of Blessed Memory referred to the Amidah as “The T’fillah,” the prayer. Nothing equals it. Standing silently, feet together, facing east, we get to “speak” to God one on one; this is our chance to speak to Him our minds and our hearts. That is why we allow everyone to recite “the prayer” in his or her own time. We wait until most everyone is done.

Torah Study          The reading of the Torah is meant as a vehicle for the study of what is being read. That is why we interrupt the reading for discussions, using the Study Questions above as our entry point. (To see this week's questions—and next week's, as well—navigate to the THIS SHABBAT page.)

The 2nd Bar’chu       The Bar’chu is meant as the call to prayer, and thus belongs at the start of the actual service. Yet we recite it again before Aleinu, near the end of services. This continues a tradition that goes back to talmudic times, affording latecomers the opportunity to praise God in this unique formulaic way. The custom is found, with variations, in S’fardic and chasidic liturgies. For how to bow, see below.

The blessings before the Sh’ma:

To respond or not to respond

Whenever a blessing is recited, we offer two responses. After “Baruch Ata Adonai” (Blessed are You, Adonai), we say “Baruch Hu, u’varuch Sh’mo” (blessed is He and blessed be His Name). At the end of the b’rachah, we say “Amen.”

If the Sh'ma is required reading, as tradition dictates,  there should be a blessing that would read something like this: "Blessed are You, Adonai, our God, Master of all existence, who sanctified us by His mitzvot and commanded us to recite the Sh'ma."

There is no such blessing because, in truth, the Sh'ma is merely the substitute for the actual required text: The Torah, or at least the Ten Declarations, which precede it in Deuteronomy. Two other blessings, therefore, introduce the Sh'ma.

But should any response be given to the blessings between Bar’chu and the Sh’ma? These are blessings preparatory to reciting the Sh’ma, putting them in the same category as, say, the Motzi. We may not speak after the Motzi until we have eaten bread; may we “speak” until after the Sh’ma, considering these blessings are substitutes and even the Sh'ma is a substitute?

Rabbi Joseph Karo, in his Shulchan Aruch, Judaism’s definitive law code, says no. we may not. Rabbi Moses Isserles, in his gloss to Karo's ruling, declares that Ashkenazim must respond. Chasidic rulings follow Rabbi Karo. Either way is acceptable here, although our rabbi’s tradition is to offer no response.

Bowing at Bar’chu is actually controversial. The Machzor Vitri (an early Ashkenazi guide to prayer) mentions the custom in passing, and the Mishnah B’rura (also Ashkenazi) believes it traces back to a verse in Divrei Hayamim Alef 29.20. The MB dismisses the verse as being authroitative, and opposes bowing at Bar’chu. (See MB 113.1 and further down in 113, as well.)

Sefardi communities do not stand at Bar’chu, much less bow.

A number of Ashkenazi and Sefardi sources argue that any addition to the order of bowing listed in the Talmud violates a prohibition against adding to the enactments of our Sages of Blessed Memory (Chazal). Among them are the Sefardi posek (one who offers authoritative legal decisions; a decisor) Yosef Pardo, who believed bowing during Bar’chu was instituted in error; the Ashkenazi posek Harav Yair Chayim Bachrach, z”l); and the Sefardi posek Harav Ben Zion Abba Shaul z”l.

However, it is so ingrained a custom in Ashkenazi communities that to eliminate it is itself halachically questionable. That being said, he procedure is:

3. At Baruch shem, bow again from the waist.

During the Amidah, we bow at various points (see the illustration above). Bowing at other times actually may be a violation of halachah, as noted above. The correct method of bowing is:

1. At the opening of the Avot blessing, at Baruch, bend the knees.

2. At the end of Avot (Magen Avraham), we repeat the procedure:

At the opening Baruch, bend the knees.

3. At Modim, we have an exception to the bowing procedure.

We do not bend our knees. Instead, we simply bow from the waist. At Hashem’s Name, we stand erect.

4. At the end of the Modim blessing (v’al kulam…hatov shimcha), we repeat the full procedure:

At the opening Baruch, bend the knees.

There is, of course, yet another “bowing,” but it is not technically part of the Amidah. As we recite oseh shalom bimromav, we take three steps backward, as if we are taking leave of our King, bowing first to our left (oseh), then to our right (shalom), and then forward. We remain bowed as we take the three steps backward. The gemara credits the practice to Rava we should bow first to Hashem’s right, which is our left.

and how to bow 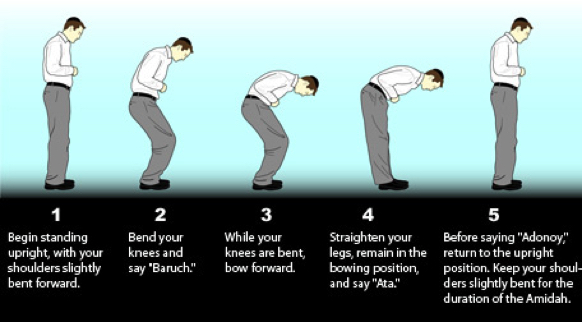